November 23, 2017
I built an Airboat with normal RC components -- I'd never done anything with RC before.

The chassis was made from the wooden pieces of my child's broken catapult model.
The rear floats are 1L bottles, the front is another bottle (whose cap was lost, so covered with cling wrap). 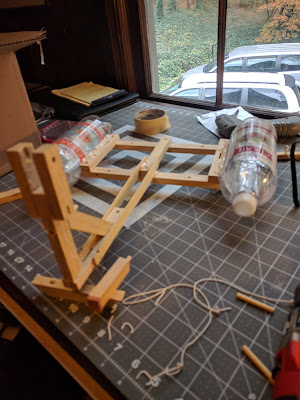 The electronics are a 7v NiMH battery powering a speed controller which in turn powers the RC receiver and the motor.  The receiver then controls and powers a servo.

The servo controls a rudder (a pcmcia placeholder card!), the main motor turns a 10" propellor.

Initially i wanted the fan at the back, but I wasn't sure how to make it high enough to avoid hitting the water but still not push the front end of the boat downward.  Eventually i put it on the front of the boat where it was much less of a problem.

The entire thing is held together with tons and tons of hot glue.

The bad:
Ultimately, I was very satisfied with the performance of the components.  I was sorry to lose the propellor, but 7 different kids got a chance to drive it first.  I didn't intend to keep the boat forever (it was more a proof of the RC parts), so i'm pleased.