the hearth wants what it wants

November 27, 2017
(see also http://evandaprojects.blogspot.com/2017/11/fireplace-surround-rock-to-cedar.html )
The Plan:
Initially I'd thought we'd buy a big slab of granite or stone and get it cut to shape for the hearth.

The wife didn't see any she liked, or weren't cost-effective, and so suggested we try pouring a concrete one.

Redesign:
In building the form we decided to rethink the design for aesthetic reasons.  Instead of solid beams on the side going floor to ceiling, we decided the wood structure should sit on top of the hearth.  Unfortunately those sides are the main load-bearing elements of the whole thing, and now i need to cut them out.

Approach:
I figured if we poured the hearth, it could certainly support the wooden structure above, but I'd need something to hold it up temporarily while we cut out the supports and poured the concrete beneath it.  I removed some cedar and attached a 2x4 spanning the width, and held it up with jack stands on either side.  Then cut away the sides with a reciprocating saw, and poured the concrete so it'd support the structure.  Then we could remove the temporary 2x4.

Prep:
I built the form out of melamine -- i had to go do a different home despot 5 miles further away.  melamine is heavy and cheap (it's particle board with a plastic coating), but it's nice and flat, easy to cut, and won't stick to much.

Attack:
Instead of normal concrete, I got mortar since it doesn't have coarse aggregate (i didn't want any showing).  Instead of calculating anything, I just got 6 60 lb bags.

**UPDATE** RE-Redesign
Instead of pouring it in place, I was convinced to pour it separately and then move it into place after it had cured somewhat.  This would allow an upside-down casting which could make the top surface smoother.  We also used rebar instead of a wire mesh.

Here's the form empty and full of mortar: 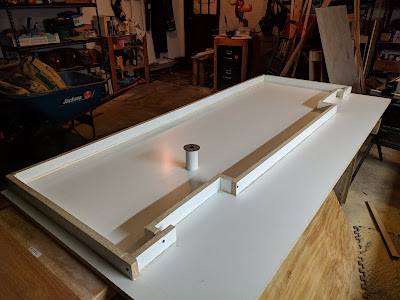 the pipe in the middle is for the gas key. 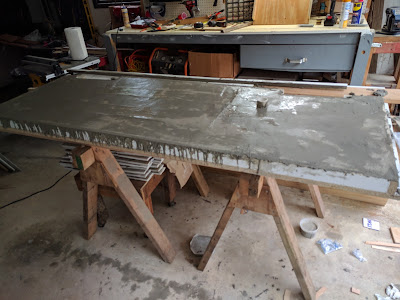